Back in February I started off an attempt to section hike the North Downs Way (NDW). It didn’t go well. I managed less than 10km before the foot injury forced me to accept an offer of rescue from a friend. Since then I’ve had several more appointments with a podiatrist. The product of this was a pain of made to my feet insoles. And they worked, I could walk without the pain.

Thursday night I found myself angry and upset. I needed to get out, I needed to do something to clear my mind. As I crawled into bed an idea formed, if I got up early, I could go for a walk. I set my alarm for 0600 and curled up with a plan forming in my head.

0600 in October is still dark, yet I crawled out of bed with enthusiasm. By 0630 I had packed a minimal day pack – map (OS explorer 137), battery pack for phone, emergency blanket, satellite beacon, and water filter. If I was going to stand a chance of doing this I was going to have to travel light. 1.39kg before I added lunch. Stepping out into the inky dark, I was greeted by I crisp Kent morning. A tiny sliver of moon hung in the sky. This felt good. I nipped to a cafe for a fried breakfast, followed by supermarket to pick up lunch, then headed to the bus station for the 0825 number 17 bus to New Barn Corner.

As I watched the Elham valley slip by the window of the bus I pondered what lay ahead of me – get off bus, walk 500m toward Postling, pick up the NDW, hang a right, follow the signs 15km to Wye, get train home. Nice and simple.

The clear crisp night have given way to a beautiful sunny day. I crossed the road and wander towards the NDW, everything felt great. 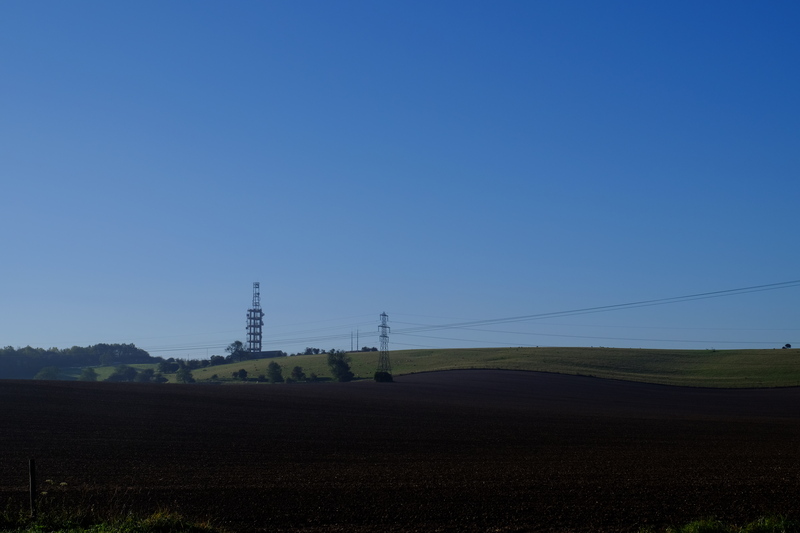 Etchinghill Transmitter – The NDW passes this transmitter mast on the way from Dover.

To save weight I’d only brought one of the two maps covering the days walk, the second half. In hindsight I should have brought the other one instead, and at the first NDW sign I made my first mistake. The sign seemed to point along the road, guessing it took the road a couple of hundred meters before it crossed the hedge, I wandered down the road. The NDW actually went the other side of the hedge, along the edge of the field. I followed the road into Postling village, where I took a footpath north to at last join the North Downs Way. I stopped to shed the fleece from under my windproof, it was too warm for that, and paused to take photos every for dozen yards. I made slow progress, but didn’t care, beautiful weather, and beautiful scenery. At some point I dropped my lens cap, and retraced my step a couple of hundred metres to find it. Plodding on I passed from the access land full of cows near Postling to fields. Passing through the kissing gate I looked for a NDW sign. Nothing, there was a footpath sign pointing north, but an obviously well trodden path continuing west. I took the unsigned path, hoping I’d find some indication soon. 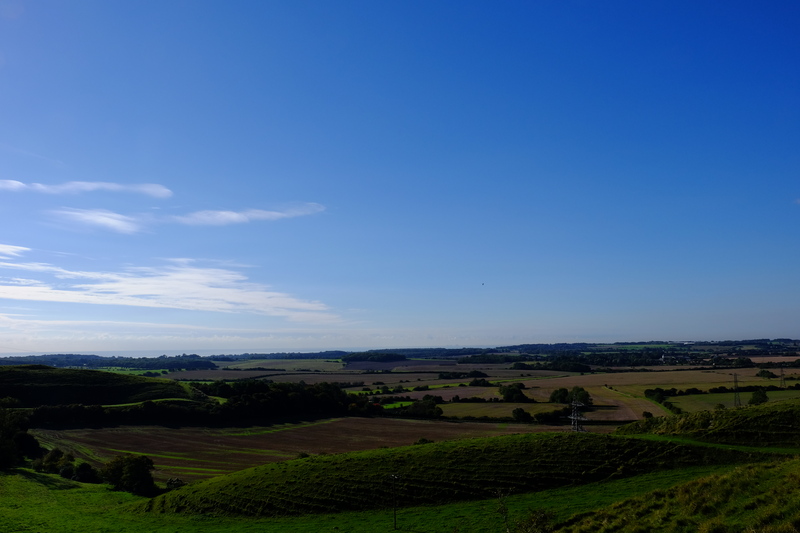 Following the path I eventually picked up signs for the NDW, and crossed Farthing common. Dodging traffic I crossed the main road into a field, I decided it was I good time for a first drink stop, and sat admiring the view while listening to the rattle of small arms fire from the nearby MOD training range. When I first attempted the NDW back in February, something that struck me was how at no point did I get away from the sound of the A20. Yet this leg, despite paralleling the M20 for a good distance, the only time I knew it was there was when I looked hard, and got the occasional flash of sun light reflecting off a lorry. 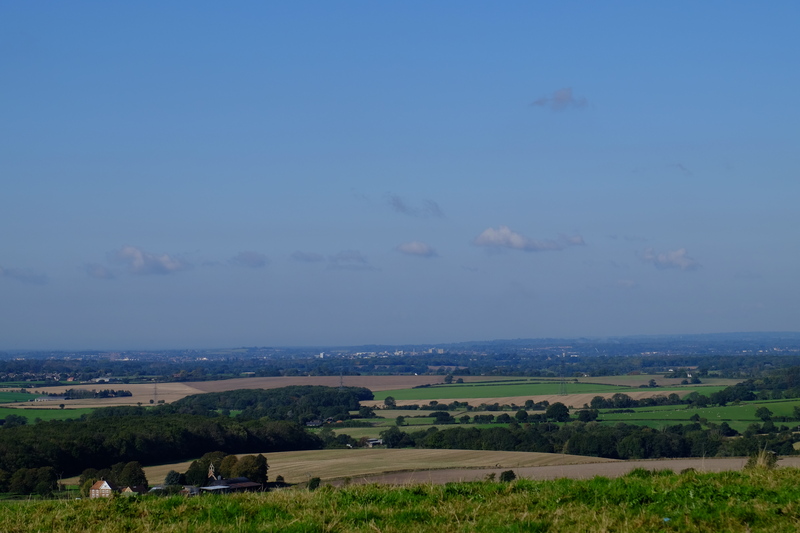 Ashford in the distance.

Break over, I continued north, parallel to the road until it turned left in the corner of a field and headed west again. Here the scenery changed from rough pasture and arable fields to a rolling hills of finer pasture, betwixt the quaint villages of middle England. I descended Cob hill to the village of Stowting, where the NDW moved from footpath to country lane. The black top would last a couple of kilometres before picking up a green lane along the top of Braebourne Downs. During this length the distance between NDW signs was greater than previous, just far enough for you to start to wonder if you’ve gone past the turning. On the road I asked a local for directions, who reassured me I was on the right route and to keep going. Alas this didn’t stop me taking a turn slightly too early, and having to back track. This added almost a kilometre to my walk. 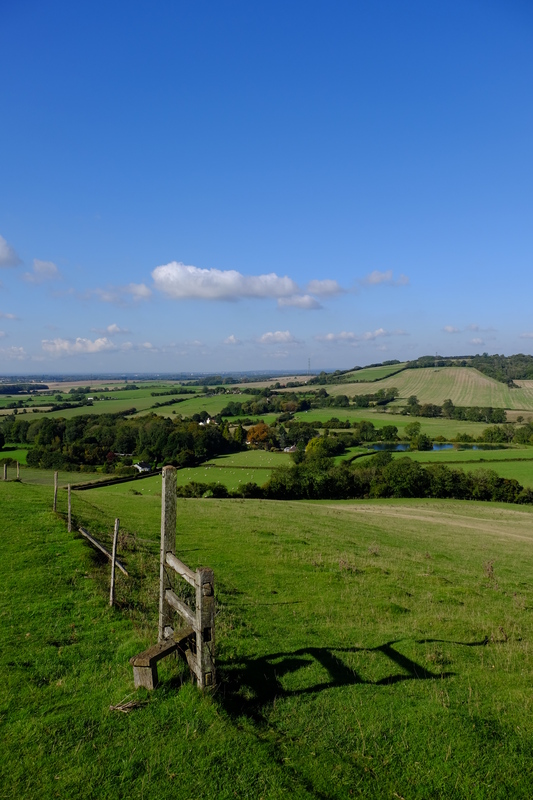 The descent of Cob hill

Eventually I left the black top for the green lane it was approach midday, and I was feeling hungry. The green lane was shrouded by hedgerows that grew over the path creating a living tunnel to walk down. This didn’t provide much by way of places to stop for lunch, so when I came across a small patch of grass in front of a field gate, I took the opportunity to stop. It turns out had I gone another 50 yards I’d haven found a bench to sit on. Ah well. 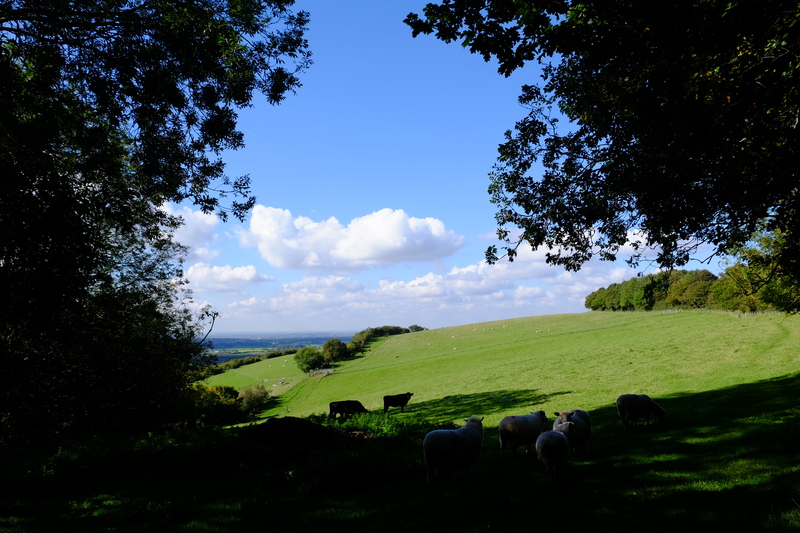 The view from lunch. 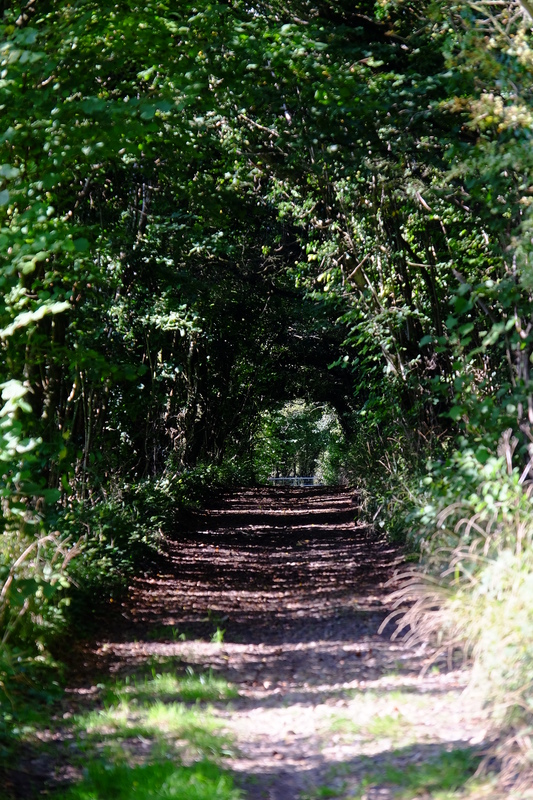 Green tunnel of the NDW near Brabourne

Just as I was packing my bag from lunch a dog walker with a pair of cocker spanials appeared. I ended up walking and chatting with her for the new kilometre or so before our paths diverged and I continued along the NDW.

Leaving the green lane north of Brabourne Downs, my hitherto comfortable shoes started to play up. I stopped in another field gateway to fettle my shoes in the hope of making them more comfortable.

The insoles that the podiatrist had made for me are made of two materials, a relatively firm EVA foam, with a memory poreon coating. It was these two layers that had de-laminated, in so doing the upper poreon layer was bunching up under the heal and causing discomfort. I fettled with the insoles, donned my shoes and continued. From here on the walk turned from a pleasant hike in beautiful scenery, into a slog of ever growing discomfort. The distance I could cover between stops to fettle my insoles decreased as the journey continued.

Whilst stopping to fix my shoes, I also had the opportunity to admire the view of Kent in it’s autumnal splendour. 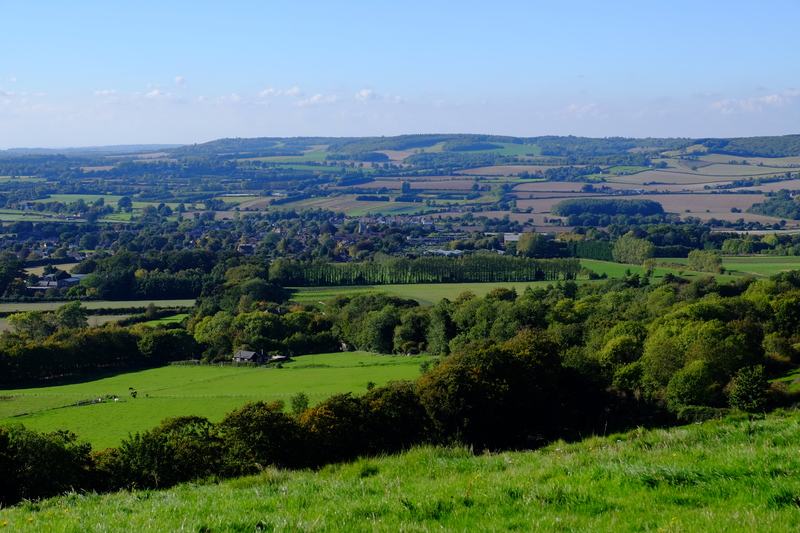 On top of Wye Downs I filled the pouch of my Sawyer water filter from a cattle trough. This was the first source of water on the walk I had come across, other than the Tiger Inn at Stowting. 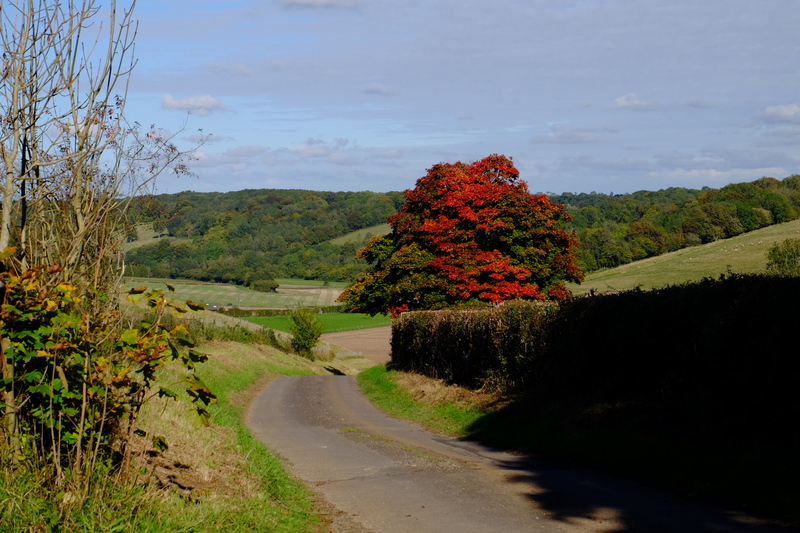 As I started the descent from Wye Downs towards Wye, the walk become more of a hobble. Subconsciously in order to reduce the discomfort in my feet I adapted my gait, this compensation would later lead to sore muscles, as those not normally used in walking were called upon.

Once again the NDW changed, from the open land of the Downs it passed along the edge of fields freshly sewn with oil seed rape, past the old buildings of Wye college before passing alongside allotments to the back of Wye church.

The church yard of Wye church has a number of impressive yews. I hobbled on. The streets of Wye marked the final kilometer or so to the station, and the train back to Canterbury.

I’d missed the train I had aimed to get due to hobbling, which gave me a longer wait at Wye station. As I sat there awaiting my train, I checked over the route my GPS had logged. 17.9km. With the couple of kilometres to the bus stop in Canterbury it brought my total for the day to over 20km. In the previous 2 years since my foot injury, the furthest I’d walked in any one day had been just shy of 15km. I’d managed to go 33% further. It made me wonder, if I can get a more durable set of insoles, could this be the start of being able to walk properly again?

With this in mind, I boarded the train back to Canterbury and started to consider the possibilities for my next trip. 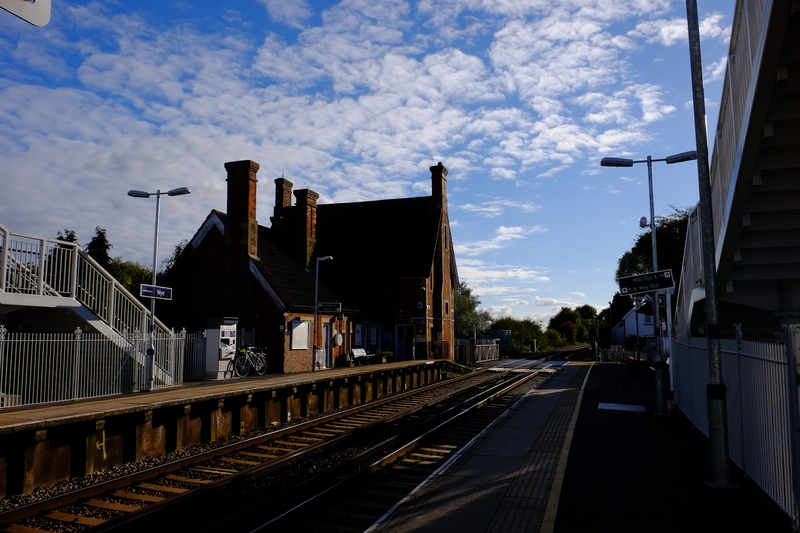 Wye Station in the Sunshine

Since doing this walk, the podiatrist has ordered me a new set of insoles which should be more durable, and to avoid the map issue, I’ve treated myself to the Harveys North Downs Way map.

I took a lot more photos on this walk that I could sensibly include in this post, the better shots I have put up on my photo website.