Winter seems to be well on it’s way, the hard frosts are predicted, and the gritters are heading out onto the roads in a bid to keep them ice free.

Just the thought of falling over on an icy bend is enough to drive most cyclists towards taking the bus to work until conditions improve. But it doesn’t have to be the case. For years Schwalbe (and others, notably Nokian), have produced studded winter tyres in various sizes that allow you to keep cycling throughout the winter months. But there has always been a gap in their range at the smaller size bracket. After all, what sort of crazy idiot would want to put studded tyres on a bike with 16″ wheels. Hello.

For the first 7 years of Brompton ownership, when ever I spoke to someone at Brompton, be it a designer, sales rep, or even the CEO (via twitter), I would mention that it would be great if there were studded tyres for the Brompton. Finally after all that nagging, Schwalbe announced a couple of years ago they would make 30×349 (that’s 16″ x 1.2″ in old money) studded tyres that would fit the Brompton. WOO!

November 2015 with a need to get to college what ever the weather, I bit the bullet and invested in a pair of Schwalbe Winter tyres. 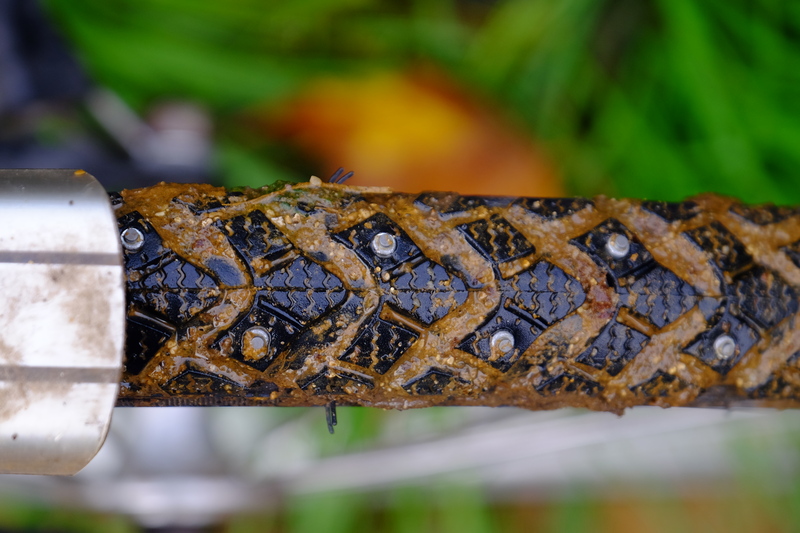 Fitting these tyres to the Brompton is not the easiest task, they come somewhere between a Marathon and a Marathon Plus in terms of difficulty, but nothing that a bead jack doesn’t solve. You just have to be aware that they fight back more than non studded tyres and fitting them can require a blood sacrifice…

The main gotcha to be aware of is that because of the way the Brompton folds, the studs will chip the paintwork on the frame when the bike is folded. Wanting to protect the paintwork as much as possible, I fashioned a couple of leather guards that I laced onto the frame. They are 2.6mm leather held on with bungee cord. 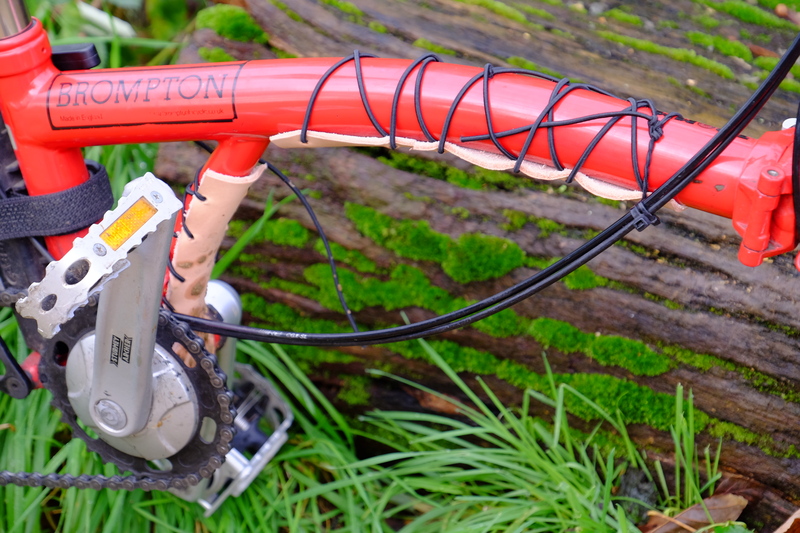 They win no awards for their beauty, they were a proof of concept that I made from scraps of leather I had laying around. Now I’ve proved the concept works, I’m pondering a mark 2 version that looks a bit better.

Once you’ve got the tyres fitted along with the optional frame protection, you need to run the tyres in on normal roads before you set off on the ice. The recommendation from Schwalbe is 40km without heavy braking or acceleration. You only need to do this the first time you fit them, in future years they should be good to go on the ice straight away.

The tyres have two recommended operating pressures, ~7 bar for roads that are mostly clear or fully clear of ice, and if you are expecting lots of ice, deflate them down to ~4.5bar. This lead to an interesting question about what pressure you should run them in at. I opted for 4.5bar. I’m not sure what pressure Schwalbe recommend. (note you can pump these right upto 8bar, but at that point the ride becomes rather painful)

Running them for the first time what becomes immediately apparent is the noise. Ye gods these things are noisy. On normal tarmac they make a hell of a racket. This can be a good thing, pedestrians certainly hear you coming. I tend to listen to music or podcasts when cycling which certainly helps cover the clatter.

Once you get used to the clatter, and the slight increase in rolling resistance compared to say Marathons, then they feel just like any normal tyre.

The tyres feel grippy in all the conditions that I’ve used them in. (Un)fortunately fitting studded tyres to a bike seems to act to ward off the snow/ice, and winter 2015/2016 was pretty mild so I didn’t get to test these to their fullest, I’m kinda hoping that 2016 brings proper snow and ice so I can get some sub zero miles in.

Over time the studs can and do fall out, over something like 600+km I lost 3 studs (2 from 1 tyre, 1 from the other). Schwalbe have anticipated this and produce a pack of 50 studs and the tool necessary to fit them. I got this for just over a tenner on amazon. They also sell a pack of 50 studs without the tool. 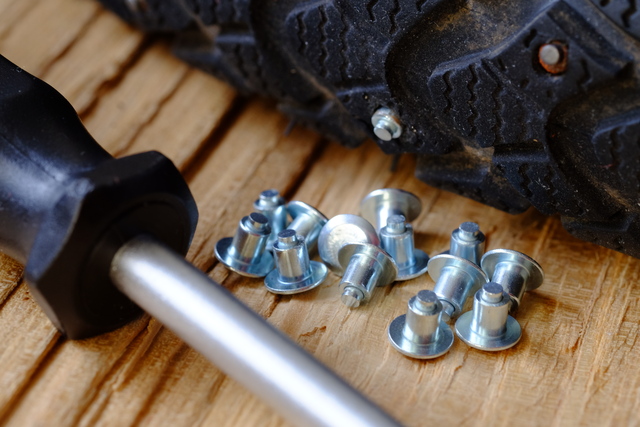 Tool, Studs and tyre. The shiny stud has just been installed, the other one has seen a season’s use.

In terms of puncture protection, the tyres come with Schwalbe’s “K-guard”. This provides some protection, but nowhere near as good as on Marathon or Marathon Plus. I had 2 punctures over the winter, both in the same tyre (rear). Fixing a puncture when it’s 0°C is a bit of an interesting experience, balancing dexterity with keeping your hands warm, so this is something to bear in mind. (For larger bikes, the Marathon Winter has better puncture protection and more spikes, but only goes down to 42×406).

All in all with affordable Spiked tyres and appropriate clothing, there’s very little excuse not to keep riding through the winter, even on a Brompton.

Post script: When cycling across ice it’s easy to forget that it’s slippery, and the moment you stop and put your foot down, you fall over. The solution to this is studs for your shoes. I have a pair of Kahtoola nanospikes for slippery pavements which work well for this.