I wanted to have a go at baking bread over an open fire (ideally without resorting to very heavy Dutch ovens). After much research it seemed that dry baking was the way to go.

Dry baking is basically sticking one pot inside another with the item you’re baking inside the inner pot. The inner pot is kept from the outer pot by some sort of separator. You can buy dry baking kits designed for hiking, but being on a budget and with most of these being US in origin, I decided to have a go at using stuff I already had.

The recipe was for a simple white loaf.

I mixed the ingredients together in the 1.6L pot. In hindsight I put a bit too much water in, which made a very damp mix. Fortunately the friend I was camping with had some spare flour, unfortunately it was self raising flour. After a bit of kneeding the dough was left in the covered pot by the fire for it’s first rise. I was making this outdoors in April so needed the warmth of the fire to get a rise within a reasonable time frame. 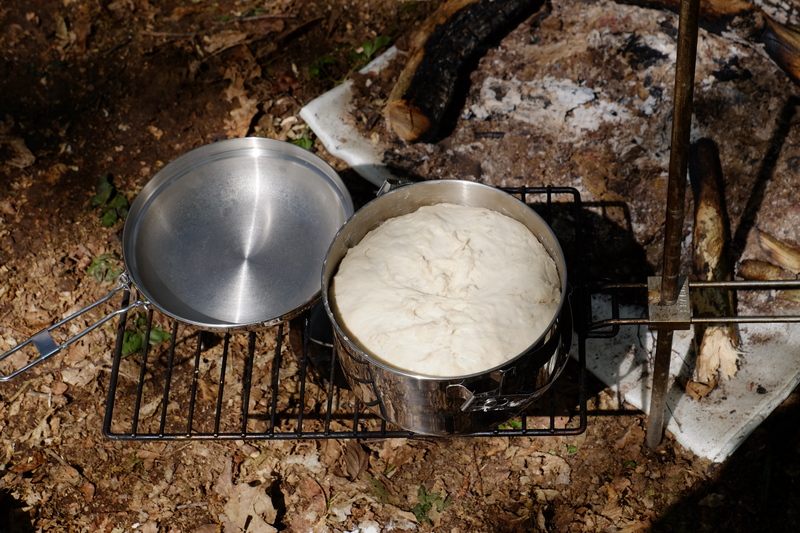 First rise of the bread next to the fire

First rise went pretty well, but it became apparent that 500g of flour makes a lot of bread, I split the dough roughly in half, one half for my experiment and the other half I gave to my camp mate for her to experiment with. Knocked back and with a brief kneed, I left the dough in the lid of the 1.0L pot with a loose covering of foil to keep it from drying out. The dough spent about half an hour next to the fire rising. 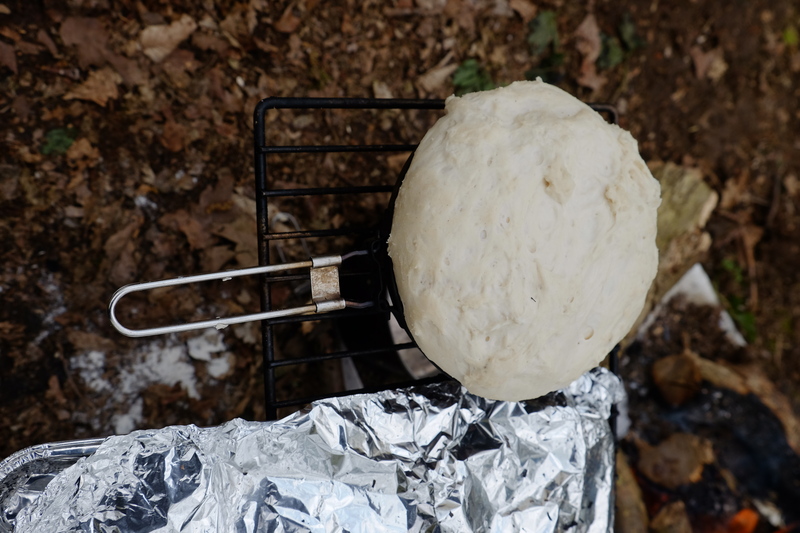 Second rise after knocking back.

While the dough had it’s second rise I built up the fire. It had been burning since breakfast that morning, but I turned the Just A Pile Of Sticks™ fire lay into a log cabin fire lay. The fire wood was seasoned hornbeam approximately wrist thick. The aim was to get a good hot bed of embers.

I dropped the dough in it’s lid into the 1.6L pot, with a layer of aluminium foil in the bottom crumpled slightly to provide a gap between the outer pot and the inner pot. Then it was just a case of putting the pot on the fire, and hoping…

While the bread cooked, I carved a butter knife out of a piece of green hornbeam. 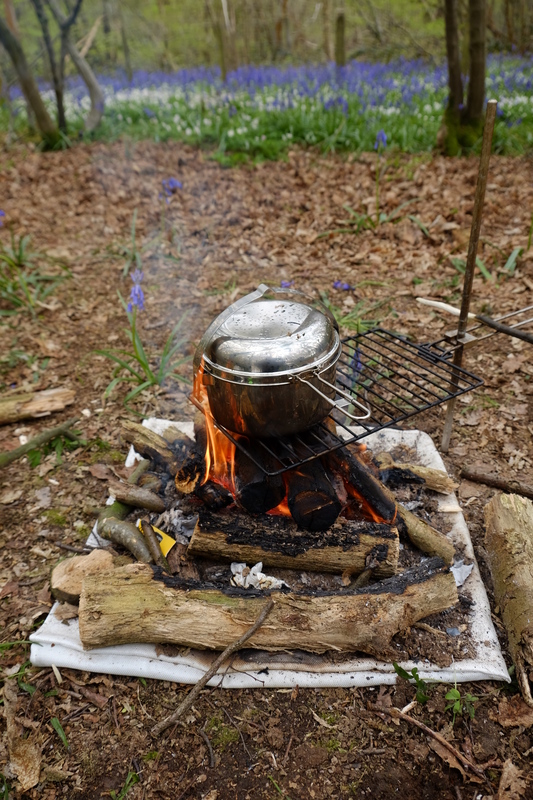 Bread in “the oven”.

After about 40 minutes I took the lid off the outer pot to take a look. It looked like the dough was cooking nicely on the underside, but not fully cooked on the top. I gave it a bit longer while I had a think, before deciding to turn the bread over. I had oiled the lid before I put the dough in, but hadn’t managed to fully coat the rim and the bread was stuck. Eventually with some levering and poking with sticks, I got it separated.

Inverted, the dough got another 20 minutes or so. I then just had the slight issue of how to get the bread out the pot without burning myself. After inverting the bread into the lid of the 1.6L pot, then turning that back out onto the ground. The result? One good looking loaf of bread, with a nice hollow sound when tapped. 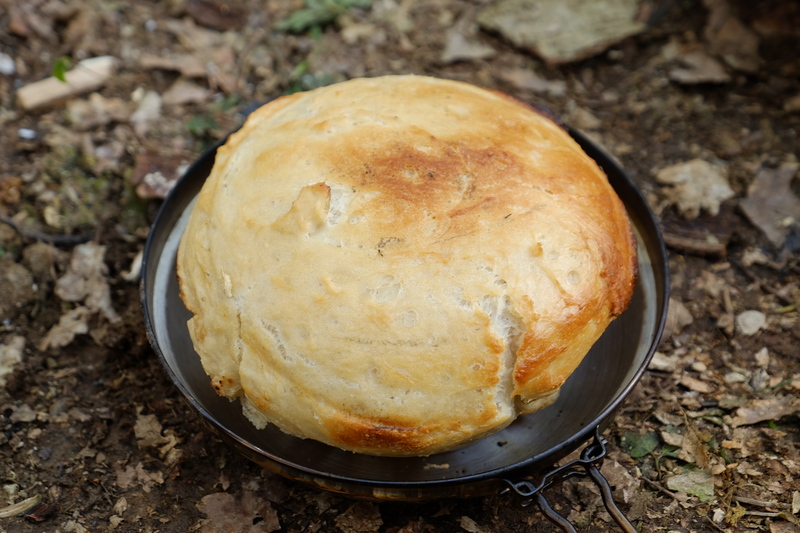 Slicing the bread through the middle, it was cooked through. Just perfect. The crust was not brilliant, I’d forgotten to score the top of the loaf before cooking. But inside the crumb was lovely. I might not win any prizes on bake off, but for a loaf of bread cooked over an open fire in the middle of the woods. I am pleased. 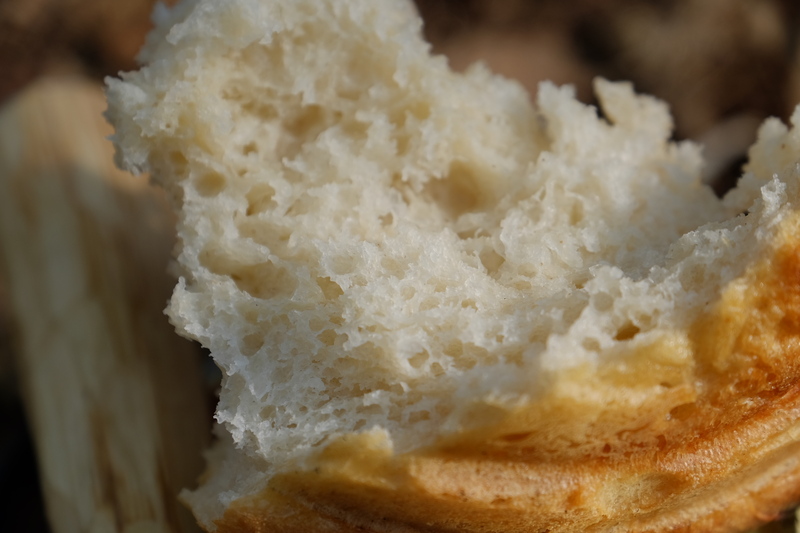 Of course the proof of the loaf is in the eating. Served up with some salted butter, spread with a simple hand carved butter knife, the loaf didn’t last long, disappearing in about 10 minutes. The taste wasn’t the best I’ve ever made, I think it could have done with a bit more salt. But it was certainly tasty enough that it all got eaten. In future I think I’ll use about half the flour and increase the salt. I’m guessing 200-250g of flour is about right for this size pot setup.

All in all, tasty fresh bread baked on an open fire, using no specialised equipment, just the stuff I have in my pack, I’m pleased with that. 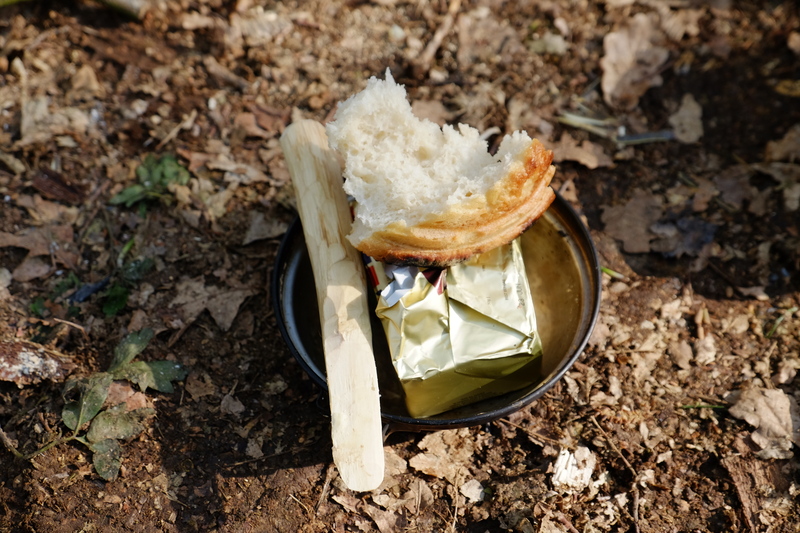 Bread and Butter. Butter knife carved while the bread cooked.

When out and about I often find huge fire scars from where people have lit large camp fires and always despair at the damage and the wastefulness of such a large fire.

So I thought while I was out in the woods, I’d take some pictures of a simple camp fire that’s big enough to cook over without needing to deforest half of Kent.

I started off by laying a raft of small logs, these are roughly an inch or so in width. 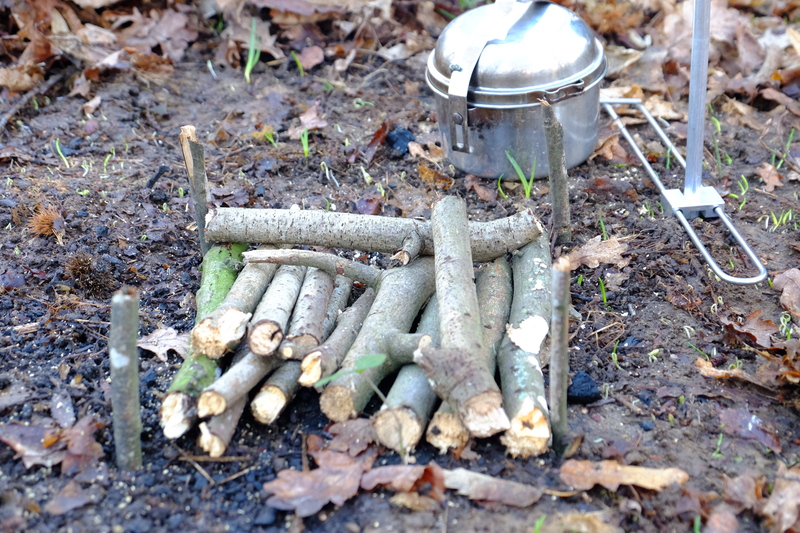 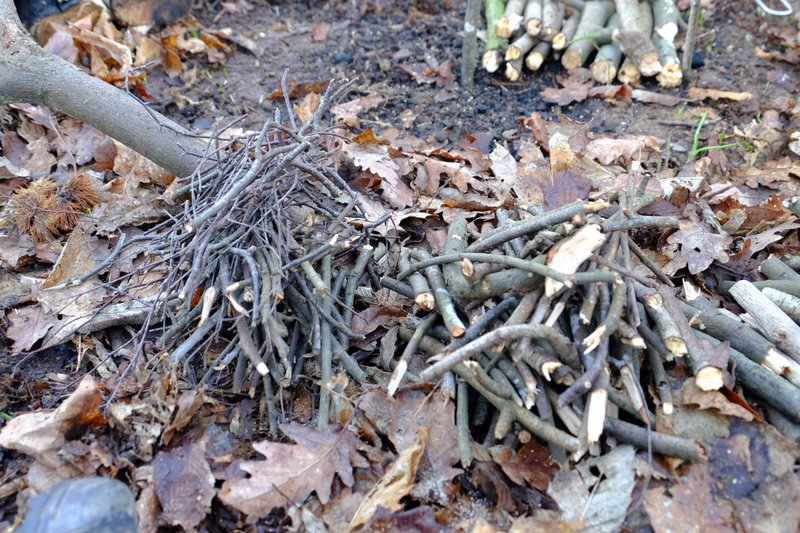 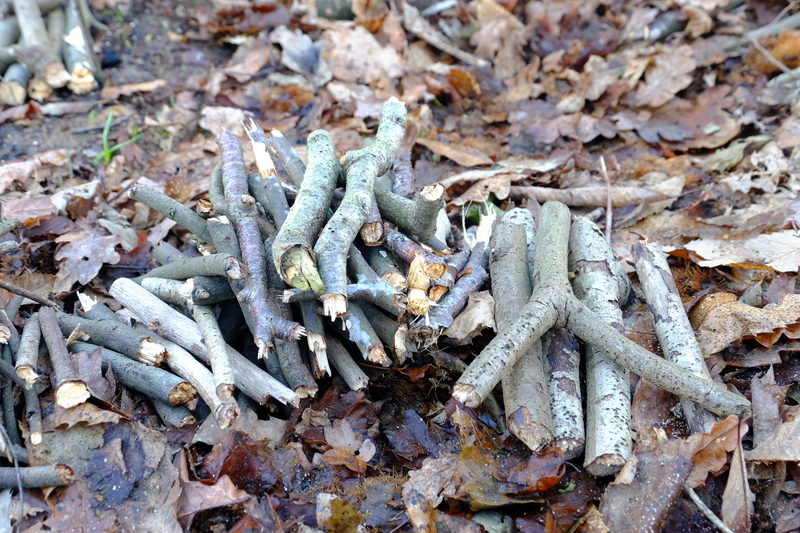 Materials prepared and ready to go, I arranged a small pile on the raft. This consisted of a couple of pieces of birch bark I found on fallen tree, and some wood shavings, with a handful of the thinnest wood on top of that. With everything prepared, I lit a tinderquik fire tab with a spark from my sparklite. This was then placed into the centre of the wood shavings and birch bark. It didn’t take long for the bark to catch the small kindling. 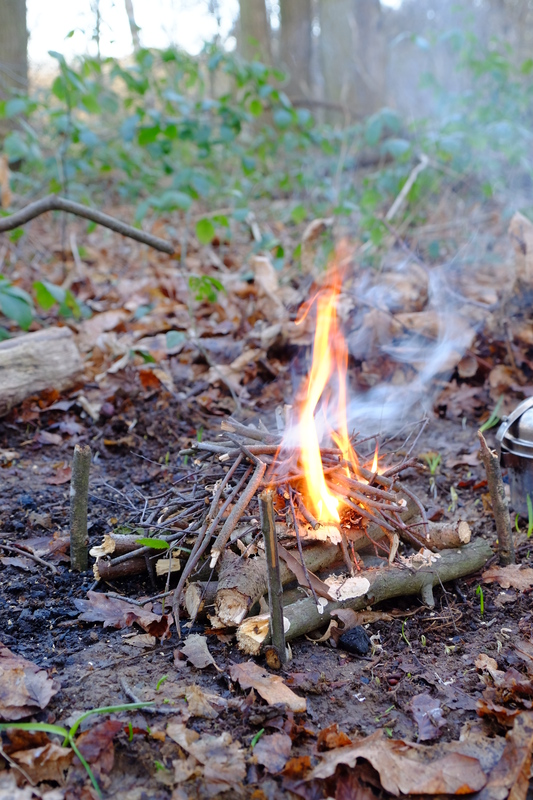 With the fire well lit I fed it with material from the piles, working up in size as each pile was exhausted. I also put a Tatonka 1L billy can over the fire with the 0.5L of water needed to make a mug of tea. In some respects this fire was a little over kill for the size of the pot I was boiling, but I wanted the ember bed for use later to cook a jacket potato. But it didn’t take long for the pot to come to the boil. 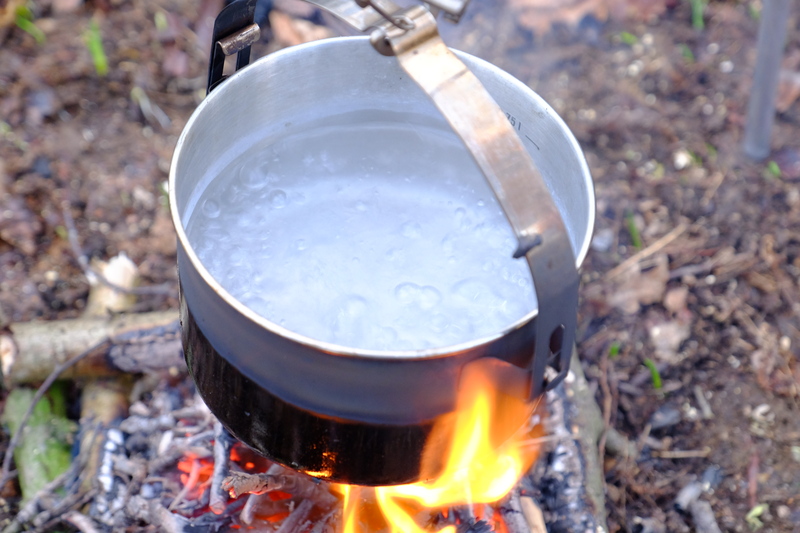 With the tea stewing, the fire starts to die down a bit. At this point if I was cooking something abit more substantial I could feed some more into to keep it going. But if not, just leaving it to burn down at this point, before dowsing it in water when ready to move away would work. How much fuel did this small fire use? Not much. I used all of the pencil thin pile, half of the finger pile, and a few pieces from the bigger pile. Tea drunk, we built the fire up a bit in order to cook 2 meals. The same basic size was maintained, but we added a larger log on each side to give it some structure, and piled a few of the thicker logs on. The log on the right of the picture is let over from a previous fire on this site. All in all this 0.0552m² fire was used to cook a pot of baked beans, a pair of lamb burgers, a jacket potatoe and 1L of chicken stew. As well as a couple of mugs of tea, and a tin of charcloth. It then provided us with a fire to sit by on the chilly (0°C) evening as we enjoyed the woods.

Some times a big fire is the right thing to do. But most of the time a small fire is just the trick. It even comes with the added advantage that you don’t need to collect as much firewood. The only tool I used for the processing of wood on this fire was the Bahco Laplander.