Through the gloom of the Sound of Mull looms a shape. As we descend, the shape takes on the form of a ships hull. The SS Breda lays with it’s stern at 22meters, 7m above the 29m Sea bed which slopes gently up towards the bow, with 19m of water above the front of the bow. My Dive buddy and I dropped onto the sea bed by the rudder, and after a few minutes playing with the squat lobsters, we rose up over the stern and entered the hull. Through cargo holds full of life we travelled slowly to the bow, before dropping over the bow to have a look at her from that angle. Alas our dive time was soon to end, and we slowly rose up to our safety stop at 3m. Hanging there in the gloom, I pondered my first wreck penetration. A beautiful vessel, teaming with life. I couldn’t help but wonder what the city the ship was named after is like, and decided that I should visit Breda at some point.

I boarded the Half speed train service from Amsterdam bound for Breda. I had with me my trusty Brompton in a full touring config, loaded up with kit for a Microadventure in the woods. Watching the flat polder landscape pass by the window of the train, the first spots of rain started to appear on the window. That didn’t bode well, the forecast was for an overcast day, not rain.

Arriving into Breda Centraal station, I loaded the Brompton up with it’s baggage and alighted the train. This station has had extensive renovation work done to it producing a modern well thought out station.

Outside the station, I booted up the GPS, and hit the road. Or rather the Fietspad. Like every other Dutch city the streets of Breda are full of segregated cycle paths running parallel to the roads. I followed the GPS along these cycle paths past wide tree lined roads. The Netherlands has a reputation for being densely populated country, yet the roads are wide with green spaces between the buildings, avoiding the claustrophobic feeling you can get in other countries. As I progressed along my route, the buildings changed and things became increasingly rural. Medium rise buildings giving way to detached houses, giving way to fields.

Eventually I crossed a motorway and decended into the woods. Being late October the trees displayed their autumnal clothes in a shades of gold, yellow and orange. 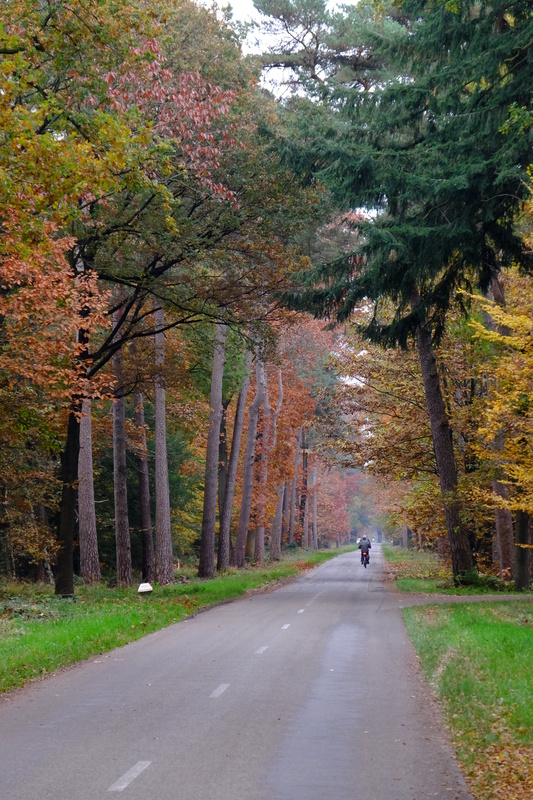 I progressed through woodland interspersed with pasture, stopping occasionally to take photos. 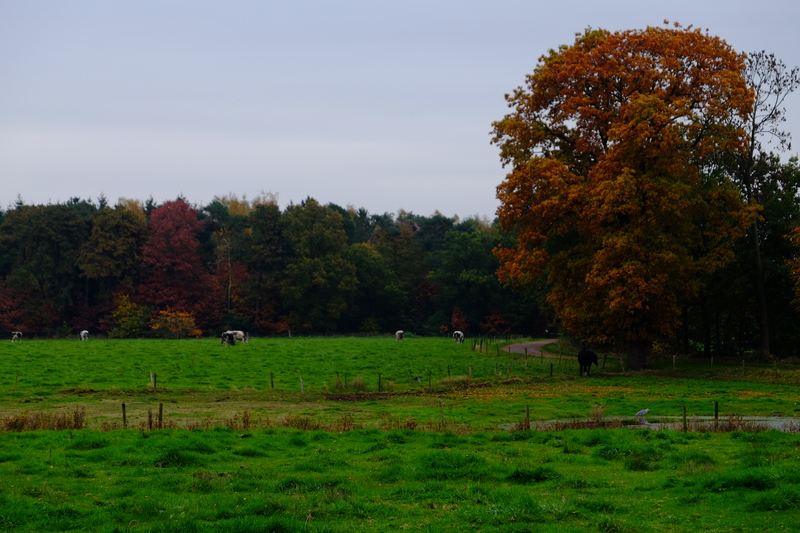 As I progressed I rode into the Chaamse Bossen, the forest I was aiming for to bivvi for the night. 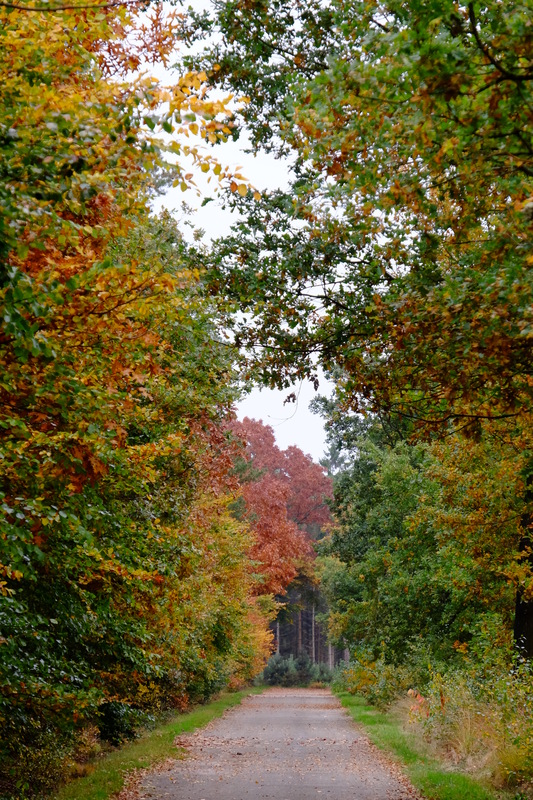 Everywhere I looked the colours shone from a pallet of golds, reds, oranges and yellows. The colours of autumn. 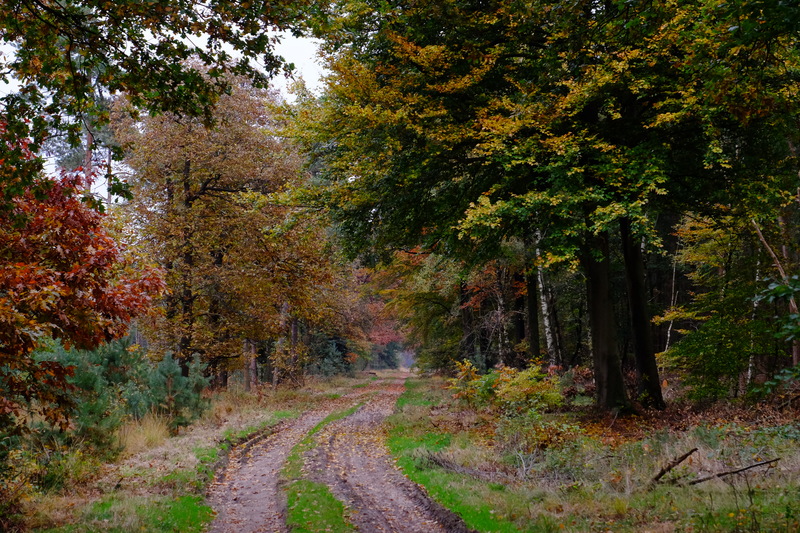 Across the Netherlands there is a network of authorised wild camping sites, each site comprises a wooden post in the ground with a sign on it, detailing that upto three tents can camp within 10 metres of the post. In the Chaamse Bossen three of these posts exist. 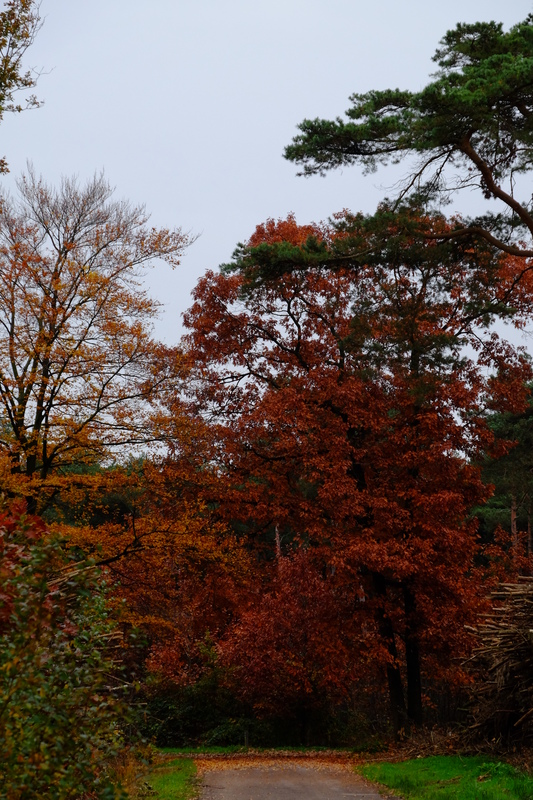 I followed the route I’d programmed into my GPS heading for the northern most of the camping posts. I had a loose idea of a plan to visit all three of the posts, and then decide which one to camp at. 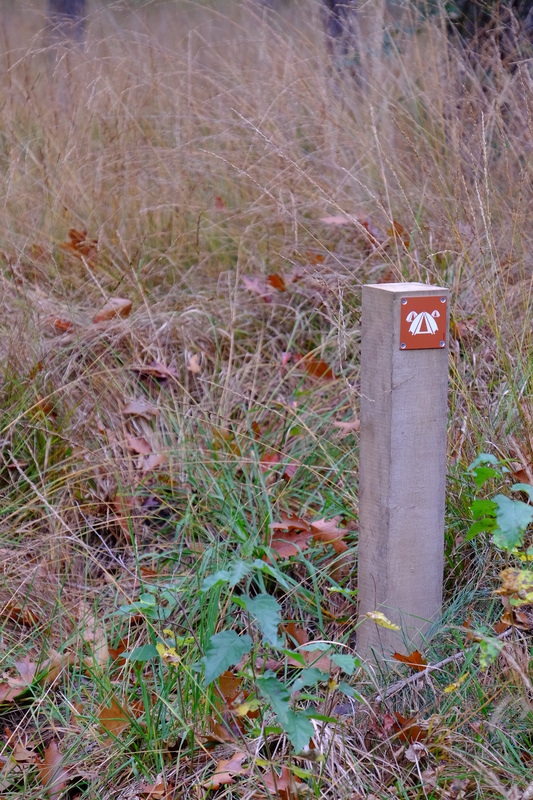 The first of the posts is located in a conifer plantation with an herb layer of golden grass. Intermixed with the conifers were the occasional hardwood. 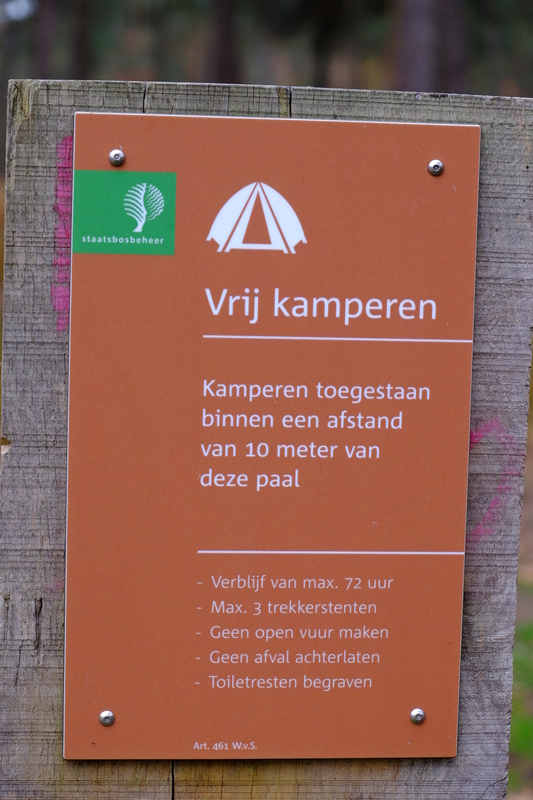 The sign on the Posts. Loosely translated into English: “Camp within 10 meters of the post. Max stay 72 hours, max 3 tents, no open fires, take your litter home, bury your toilet waste.”

The website that lists all of the posts mentioned that fire wasn’t allowed, and I’d had a discussion with a Dutch friend who reckoned that this would include my little meths stove. I was rather surprised to find a fire pit next to the post. I was also slightly surprised to find two tents setup in the undergrowth, midweek in October I had expected noone else would be mad enough to be out here… I was wrong.

I looked at the map, the next post is 2.7km further south. Do I gamble on the next post being better, or do I go with this spot. I um’d and ah’d.

I decided to push on.

Given the impending sunset, I decided to put the camera away, and concentrate on getting to the next site fast. This meant that I arrived at the second site just over 10 minutes later, having pushed the bike along the last 50m or so to get to the post. Here I found the same fire ring, surrounded with a square of logs. Unlike the coniferous location of the first post, this one was a mixture of pines and hardwoods. The herb layer seemed to be mostly made up of mosses. There was noone else here. It would be perfect.

I chose a bivvi site between a small oak and a pine. It was only 1700, so rather than setup my bivvi bag, I decided to light a fire. Having travelled via eurostar, I was limited in what tools I could bring to the Netherlands with me. Just a Leatherman Juice CS4 and my Svord Peasant Mini had made the journey to the Netherlands with me, but I’d left the Leatherman in Amsterdam, not expecting to be able to have fire, I hadn’t expected to need it… Bah.

I’ll be limited to only burning what I could snap, or find already small enough to fit in the pit. Fortunately some previous users of the site had left quite a bit of material laying around, so along with the pile I collected I had a small number of chared logs. I started with some dead hanging wood I’d removed from an ash tree along with a pile of dried pine needles, arranging this on one side of the fire ring. I had in my bag a Spark-lite aviators fire kit, these are a small plastic box containing 8 tinder-quik fire tabs, and a single handed sparker. I fluffed up a tinder-quik, spun the wheel on the spark-lite. It caught first strike. I hadn’t quite been prepared for that. It also burned faster than I had expected because I’d fluffed it up too much. In my surprise I dropped the fire tab on the arranged kindling… missing. I tried to push it into the target kindling with a twig, but before I could, it burned out. On the second tinder-quik I didn’t fluff it up as much, so it took half a dozen strikes before it caught. I placed it into the kindling. The twigs caught. Success.

I spent the next 5 hours slowly feeding twigs into fire, cooked a simple meal, enjoyed the woods.

Starting to get sleepy at about 2200, I started to pitch my camp. Sleep mat inflated, bivvi bag rolled out with sleeping bag inside it. I started readying for bed when the first few spots of drizzel landed on my glasses. I had hoped to not need a tarp, but the weather wasn’t allowing that. I rolled out my small tarp in a basic A ridge config and crawled into my bivvi bag. I was glad of the tarp later in the night, listening to the acorns bouncing off it.

As I was arranging my self into my bivvi bag, something caught my attention in the direction of the path leading to the post, a light. Dimming my head torch I studied it. The light moved. Slowly the light approached the camp ground and I could make out it was attached to a bike. The light was shined at me. I turned my light on and flashed it back. A voice in the darkness said something in German. I replied in Dutch “Auf engels?”.
They repeated themselves. “Do you speak English?”
“Are you alone?”
“Yes”
He had a brief look around the area near the post before selecting a spot to pitch his tent, then spent the next 20 minutes noisily moving kit between his bike and the tent.

I woke up to my alarm at 0630. I’d chosen 0630 to be before dawn, so I could make an early start. I was slightly confused to find the woods lit up brightly. I poked my head out from under my tarp and looked up at a bright moon. That would explain it. I visited the shrubbery, and crawled back into my bivvi bag to watch the dawn.

I woke again at 1000 to find the woods filled with sunshine. Oops. 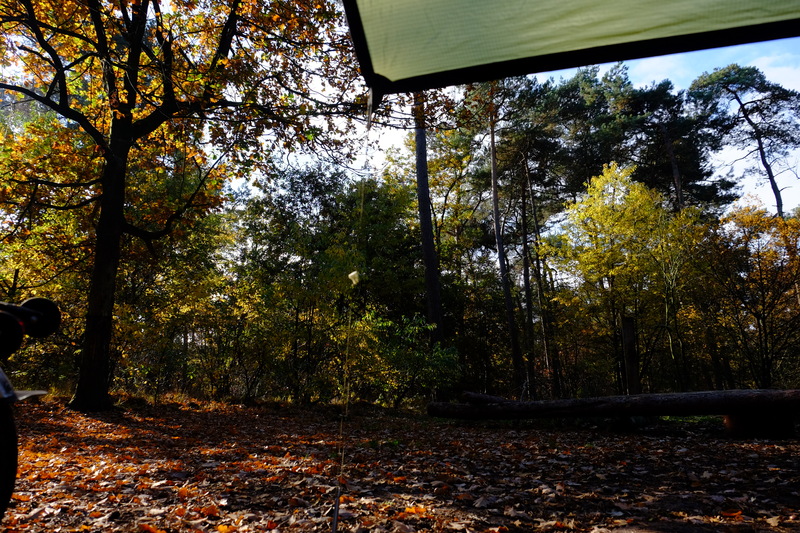 A room with a view. The view I woke up to

I crawled out of my bivvi bag and sat by the fire pit. Coffee. I fired up the stove and tried to wake up a bit. I noticed that the guy who’d turned up late had already left, leaving behind a clear pitch. I sat drinking my coffee and soaking up the sunshine. Mug empty, time to pack up. 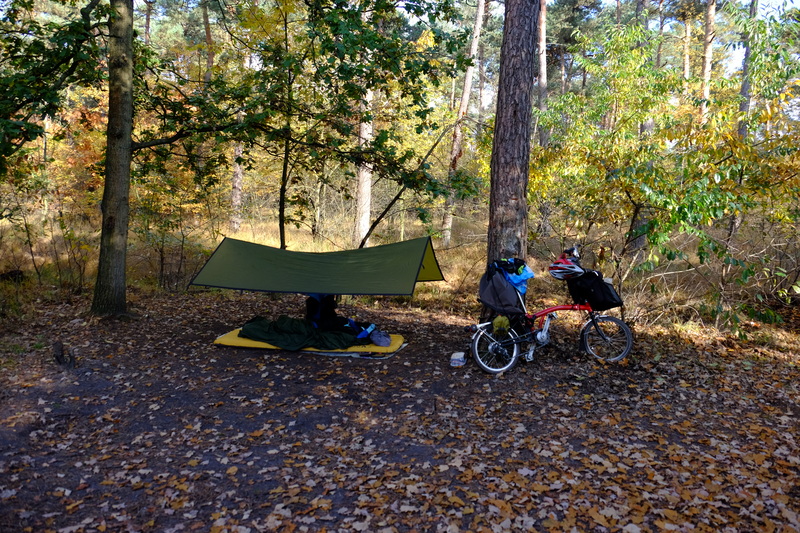 My camp. The dip in the ridgeline is my jacket hanging up to dry.

It took about 10 minutes to get everything loaded back on the Brompton, and I set off into the woods for the 18km ride back to Breda and the train to Amsterdam.

On the way here the day before the trees had looked amazing even in the grey overcast. This morning in the sunshine they looked even better. 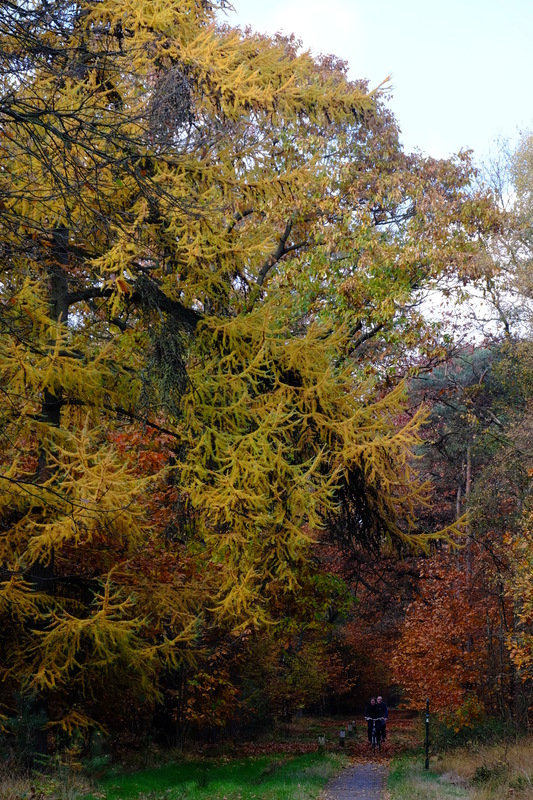 I wasn’t the only one who had ventured out on the bike to enjoy the warm autumn weather, as I cycled back to Breda I passed a number of cyclists, ranging from lycra clad road cyclists zooming past, to old couples slowly plodding along. The ride back was faster than the ride to the woods, and it wasn’t long before I reached the edge of Breda. I was struck by the juxtaposition of a medium rise block sat on one side of the road, while on the other side grass fields and farmland. A meeting of city and countryside, and everywhere there were trees in stunning display of Autumn colours. 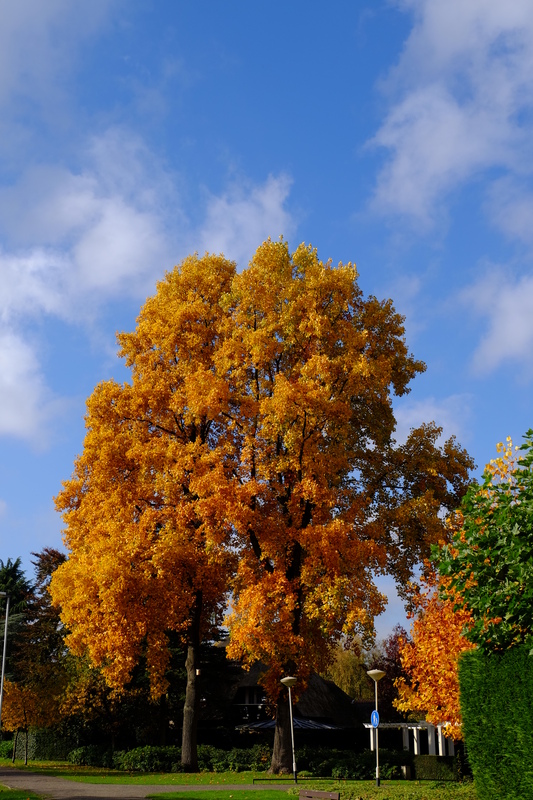 This tree was less than 1km from the railway station, next to a main road.

I stocked up on food and drink in the AH togo at the station, before boarding the half speed service back to Amsterdam, recharged and invigorated after a fantastic night out in the woods. Breda and the Chaamse Bossen was fantastic, I might have to come back.