I recently switched to the Osprey Tempest 30 backpack from my old Deuter Futura 32AC. This is the ladies version of the Talon 33. For the most part everything I say here will apply to the Talon as well as the tempest. 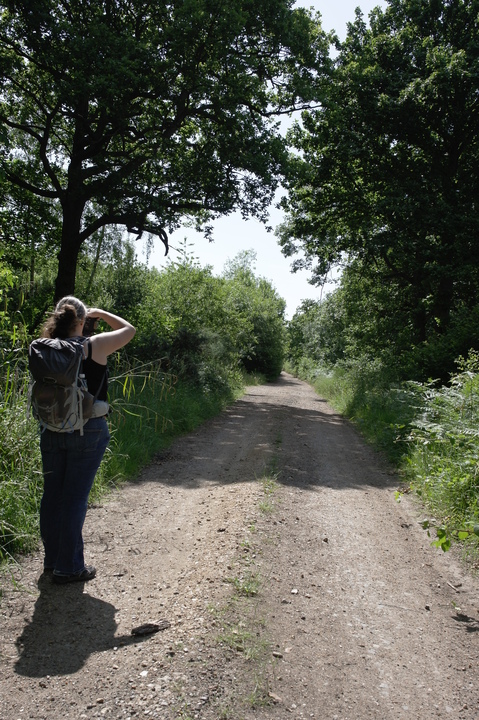 I’ve been using this pack as my every day handbag for the whole summer now, including a few over nighters, and an ascent of Pen-Y-Fan. So I think I’m getting used to it. Despite what is pretty light usage, there are some signs of wear appearing. 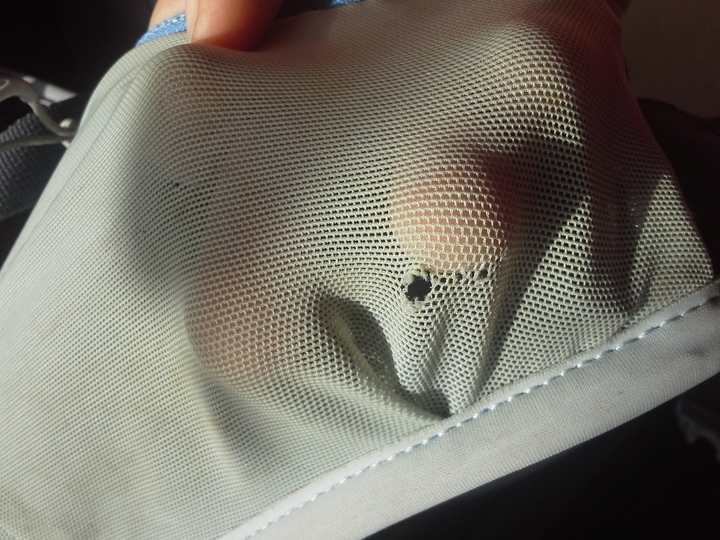 I tend to store my keys in that pocket, so both are possible answers.

On the side pockets the mesh has also taken a couple of nicks, nothing serious, but it isn’t perhaps as durable as the packs I have been used to: 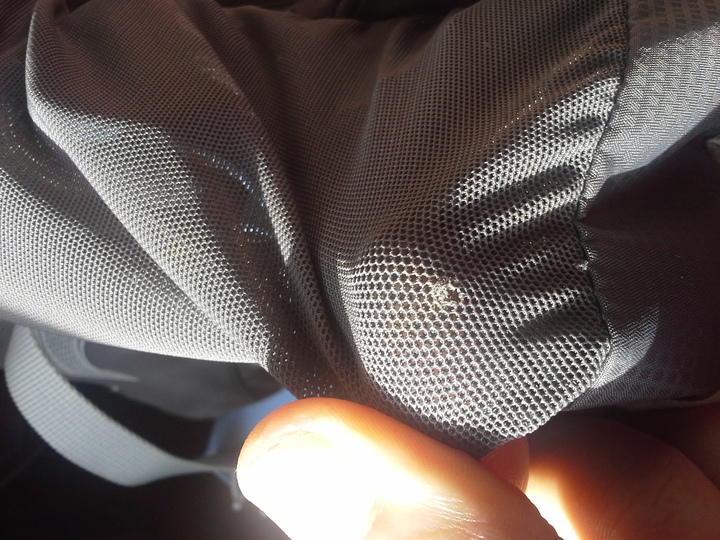 Beyond these two niggles, there are no other obvious signs of wear.

What about usability? Due to the lightweight back system having very little rigidity, if you sit the pack on the ground, with a loaded lid pocket, but an empty main pocket, then it crumples. This makes packing slightly more awkward than I would like but it’s to be expected from such a light pack. The draw cord for closing the top is not your standard toggle, but a slightly awkward to use system. The main issue being that you have to use two hands to open and close the pack, unlike your normal toggle that you can usually use one hand to open and one hand plus teeth to shut. This is an awkward niggle, it’s not a show stopper, but it does niggle if you have to go into the bag a lot. It’s worth noting that the Airscape back system does not keep your back dry on warm days. I’ve yet to find a back system that doesn’t leave you with a big sweaty back, so this is hardly a black mark on the Tempest, but something to be aware of. 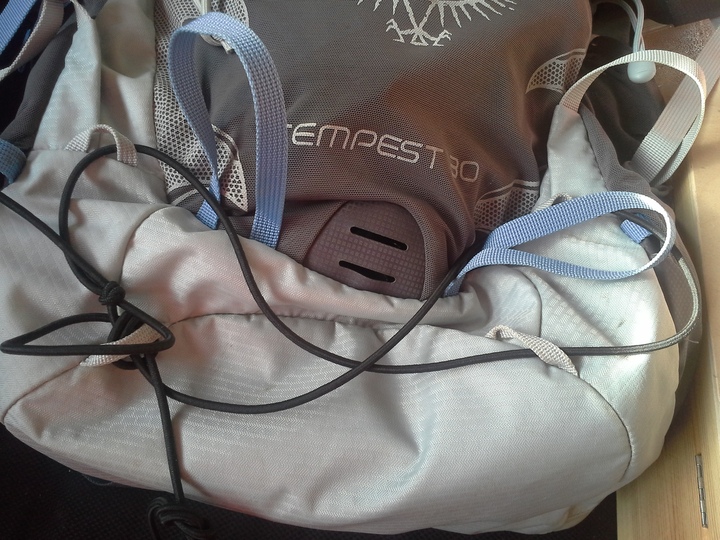 Comfort is a bit of a mixed bag. On the one hand with 16kg of load, the pack was very comfortable, transferring the weight onto my hips effectively, Better than many heavier packs with more substantial frames. *BUT*, and it’s a big But, there is one part of the pack that lets it all down. The pack is the ladies version, aimed at women. Women come in many shapes and sizes, myself, carry round with me a little bit more Kummerspeck than I would like, and my chest is sufficient to distract many men. The combination of this means that where the straps on a pack lay on the female form is not the same as it would be on a male form. This, along with back length, is one of the important reasons for choosing a ladies pack over a mens. So you would think then that a ladies pack would sit comfortably across the chest. 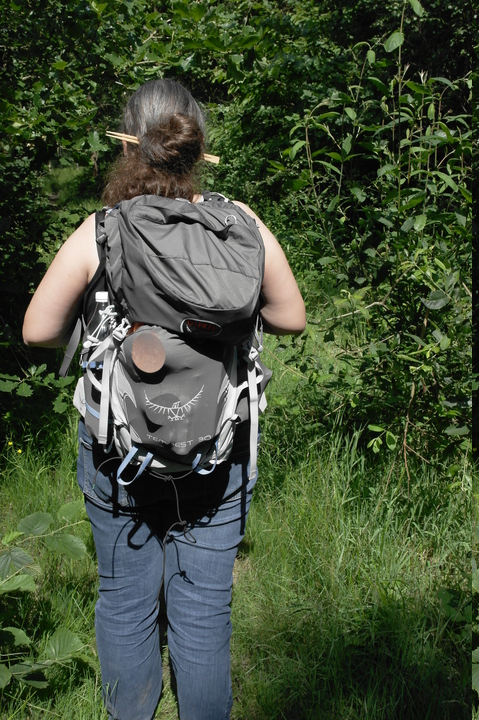 Well you’d think that. The reality is, while the padded section of the strap sits nicely and comfortably. It’s great. *BUT*. at the bottom of the padded section, there is a ladderloc that connects to the webbing that goes to the base of the pack. It’s this ladderloc that is the problem. For anatomical reasons, this ladderloc on the female form arrives right on the side of the body, where the upper arm rubs against the body when you walk. This becomes more and more uncomfortable as the hike progresses, to the point of large red uncomfortable marks on the arm by the end of the day. I’m sure that on a more thinner woman it might be less of a problem, but considering that this pack is aimed at women, you would think they would have tested this on a few different shapes and sizes… Modifying the pack to fix this problem isn’t a major mod, it’s one I’ll be making over the winter ready for next year, but right now, it’s a big let down to what is otherwise a really nice pack. 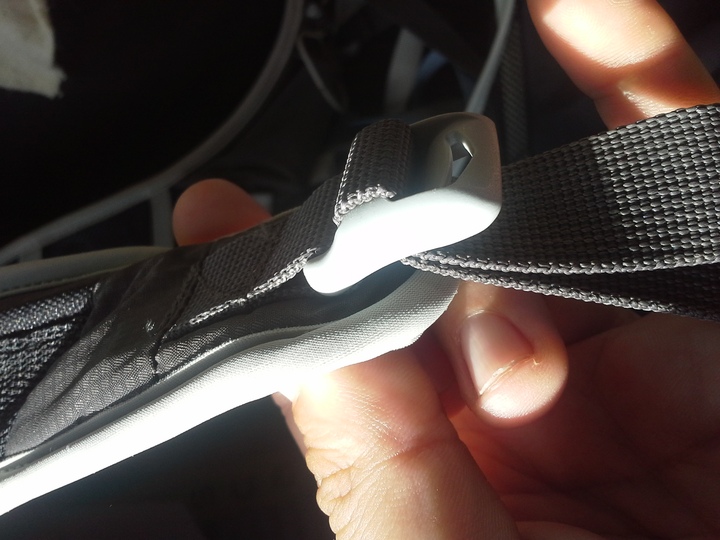 It’s very easy when writing a review of a Lightweight piece of kit to suggest that if you add this, and add that you could improve it, do that enough and your lightweight pack is not so light any more. But I do have to wonder how much extra weight it would add to stick a couple of lash loops on the bottom of the pack. Or move the triglide on the strap down a bit so that it actually works with the female anatomy…

On the whole this is a nice pack, it’s light, and carries the load well. I don’t regret buying it. It’s a good pack, but a couple of tiny niggles stand in the way of it being a great pack. Maybe Osprey will one day make a version 2, that fixes these bugs.