I’ve had a question asking me what tarp I use when I’m wild camping with a bivvi bag.

I own three tarps. Which one I take with me for any given trip depends on where I am going.

The first tarp I got is a British Army Basha. It’s 2.5m x 2.2m, made from Silnylon, and weighs in at nearly 1kg with guy lines. It’s a lovely tarp that covers a nice big area, but it is very heavy. If I am car camping and don’t want a tent, then this is the tarp I use. 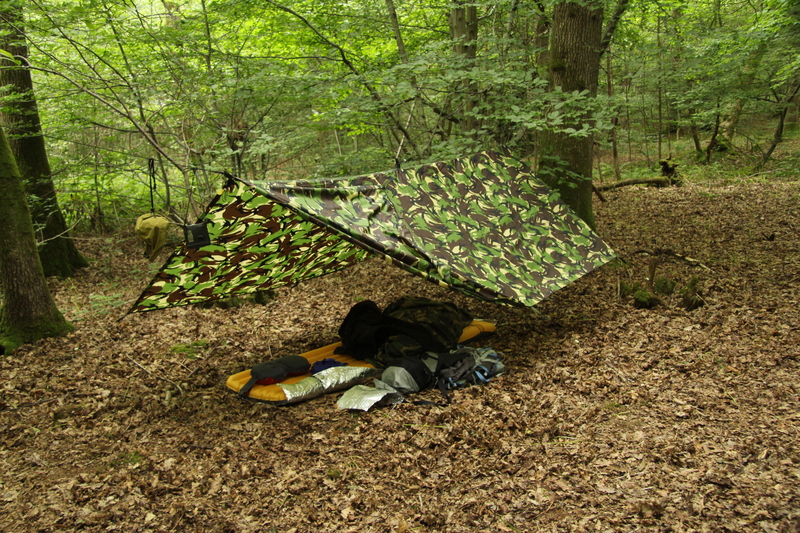 The second tarp I got is a Miltec Flecktarn Plane Tarp. This tarp is 2.6m x 1.7m, weighs in at 450g, and is made from PU coated nylon. This is the tarp I take when wild camping in lowland situations where perhaps wild camping isn’t entirely encouraged. The flecktarn camo pattern blends well with many of the areas I camp in, particularly in winter. This tarp isn’t as big as the Army Basha, but it’s half the weight, and provides enough cover for me in a bivvi bag. 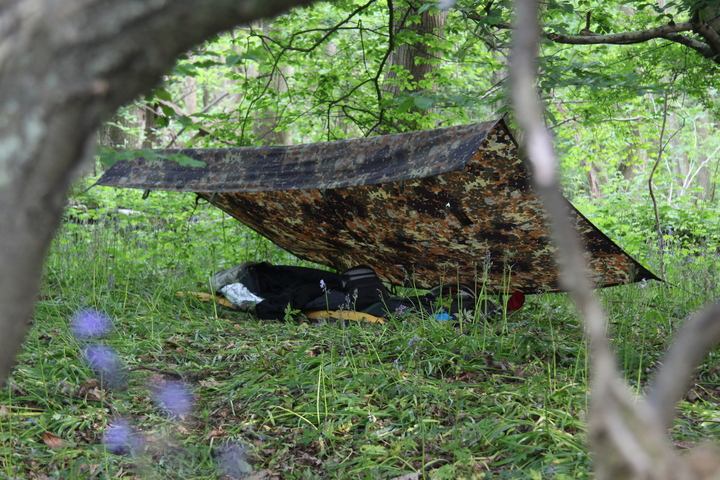 Miltec Flecktarn tarp in the woods – May ’15

The 3rd tarp I own is a RAB Siltarp 1, this tarp is 2.2m x 1.5m, weighs in a 198g without stuff sack, and is made of Silnylon. It’s a beautiful light tarp that I got to use with a bivvi bag when wild camping in locations where stealth isn’t my primary concern. In some respects the lightness of this tarp has given me headaches with other aspects of the tarp setup. Add eight 12g pegs, and you’ve increased the weight by 50%… I use 1.12mm microparacord for the guys on this tarp, it’s under half the weight of the 2mm dyneema I normally use for my other tarps. The total weight of the guys on this tarp is 28.6g. I’m still searching for the best pegs.

If you ask on a bushcraft forum for a tarp recommendation, the DD 3m x 3m tarp will come highly recommended. I decided against it as being too heavy, and also too big. Camping in woodlands, finding space for 9m² of tarp is not always easy. If I was in the market for a new tarp to use when bivving aside from the tarps I own, the other that I would consider near the top of the list is the Alpkit Rig 3.5.

On all my tarps I use glow in the dark line loks on the guy lines. They provide just enough visibility at night to see where I put my guys. I currently have some spares up on ebay if anyone is interested.

Hopefully this post has gone somewhere to answer the question about which tarps I use, and what tarps I would recommend.